Wishes on the Mountain Top

As part of the event that took place at the Galerie Vivienne on June 19th, it had been decided that a children’s workshop booth would be set up with the cooperation of the people at « si tu veux (jouer) », a toy store in Paris. 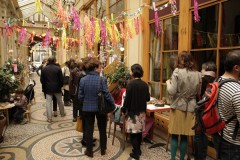 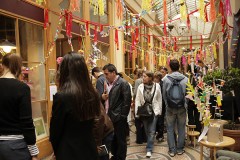 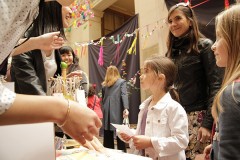 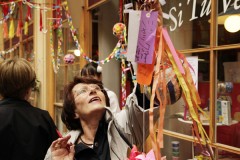 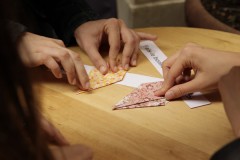 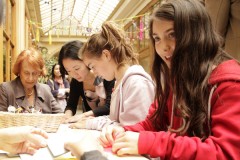 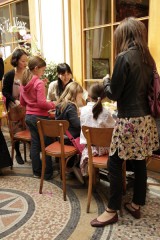 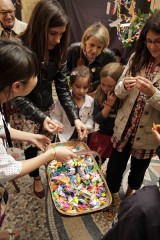 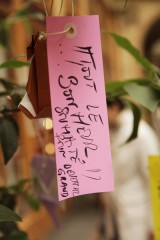 As we were going on with the preparations, “si tu veux jouer” owner Mrs Madeleine Deny suggested that we develop this idea into something related to the Tanabata Festival that was coming up soon, as she herself had always held a lot of interest for this Japanese tradition in particular.

As tradition holds it, such wishes as are written and burnt on the night of Tanabata (the seventh night of the seventh month in the moon calendar) will be granted by the princess Orihime and her husband.

In fact we had also considered sending those wishing papers directly to Japan and display them in an exhibition, but this plan would have required the help and consent of many people, and turned out to be too hard to organize. Therefore we proceeded to burn the papers on the night of Tanabata, as we had first intended to do.

Mrs Kyoko Dufaux, the artist behind the exquisite pictures exhibited at the children’s workshop booth on the day of the event, was part of this trip to the Alps Mountains. Here is her account of the night she spent there.

From the time we left Paris, it took us about four hours driving and riding the train to reach our destination. The place was a small town among the mountains, near the border between France and Switzerland. We had come to burn the wishing papers gathered at the Galerie Vivienne event, as part of the Tanabata celebrations. The small coloured pieces of paper were all packed inside my handbag, filled with all the messages from french children, and with everyone’s wishes for Japan’s quick reconstruction.

The ceremony was to be held in a small mountain hut set on the mountain side, in a wide bucket shaped pasture. Through the windows we could see the mountain slope opposite us where cows were quietly grazing, other summits appearing in the distance and above all the bright blue sky so typical of this region, with white clouds slowly passing by.

We were surrounded by an appeasing silence through which we perceived only the music of small insects hidden in the golden shrubs around us, and the feint tinkling of cowbells in the distance. It felt like we were wrapped in the quiet, peaceful atmosphere of the place, and we realised just how far we were from the busy bustle of the city.

In France days seem very long in the summer, and though it was already nearing 9 o’clock, we were still under the broad daylight. We waited yet a little, and at this time of the evening when the sky begins to show the slightest tinge of red, we began the preparations for the bonfire. The owner of the mountain cabin, a young woman of hardly thirty, very kindly offered to help us, and along with her seven other people, who all seemed to be very expert mountaineers.

We chose to start the fire on a gentle slope near the cabin, from which you could clearly see the Mont-Blanc in the distance. In the woods nearby, we collected dried leaves and firewood piling them up on the spot we had chosen, and then proceeded to lay the coloured papers and folded cranes on the side. We finally lit the fire, and very soon the flames rose, dancing high above the ground.

Little by little, the sky was getting darker and darker, dark enough now for us to see the stars, and as the night passed we kept throwing the colored pieces of paper in the fire, one by one. Watching as the paper burnt, it somehow felt like the wish it had once contained had changed into sparks, rising high in the jet black sky like so many shooting stars. Rising high and fading.

We weren’t the only ones who seemed moved by the ceremony, the people who lived in this mountain too, those who had been so kind as to give us a hand earlier, kept their eyes fixed on the fire. They seemed to glow with a warm, positive feeling, a pure joy of living, a feeling so strong and so comforting we prayed it would be carried away by the wind, along with the sparks and the cinder, carried away to this place where right now, there is only sadness, anger and despair to speak of.

Coming to a mountaim top to throw our wishes for Japan in the fire was in itself very symbolic, an image of the words reaching high into the sky and to further places. As the ceremony went on however, we realised that there was yet another, deeper meaning to what we were doing. The mountain wasn’t only the closest place to the sky, it also happened to be far, very far from the everyday life we had left behind us in the city. Up there, there was neither tap water nor electricity. For the young owner of the mountain cabin, living such a healthy, ecologic lifestyle seemed obvious, a choice to which the alternative was hardly worth considering. I believe we may have a lot to learn from these people, living close to nature and getting on with their lives in the simplest, purest way. As the ceremony went on I realised just how important it had become for us to forget our busy lifestyle, to stop seeking only what is practical, and to try and lend an ear to nature.

1 Response to Wishes on the Mountain Top