What is regeneration? —
What we learned from music

Arriving at Sendai Airport last summer, I was full of nerves. Even now I remember anxiously wondering what was the use of my being there, despite my underlying desire and compulsion to go. The usually cheerful orchestra members were all quiet. There were mixed feelings about the hastily arranged visit among members’ parents. The schedule was not fixed until the last minute and a lack of information heightened the anxiety. E-mails went back and forth asking questions such as “What on earth is a ‘portable bath’?” and “How many bottles of water should we bring?” Our only knowledge of the situation in Tohoku after the disaster was via the media. It was like going unprotected to an unknown world.

The airport was empty and quiet. We got on the bus to Kamaishi City. Through the window, piles of rubble created a scene far more tragic than that which we had seen through the media. Witnessing it with my own eyes, I did not know how to make sense of it all. Strange sayings such as “seeing is believing”, “superficial knowledge” and “shallow and thoughtless” were going around in my head. I did not know whether I was trying desperately to think and understand it all, or to escape from reality.

Towns diligently built over many years were washed away in a flash by nature. The ocean and the tsunami devastated these places, as if sneering at people’s efforts. I didn’t want to think about it. Buildings had been destroyed and swept away; people had died. Was it the right decision to come here? How had I come to be here? My anxiety gave way to restlessness and regret.

Our first stop was Nehama Beach, where we played a song of prayer to the ocean. Amid my lingering confusion, I played for those who would not come back from the ocean and for the ocean itself, alongside which people will continue to live. Local people gathered, listening quietly to the music. “Thank you. Thank you”, they said to us over and over. I was filled with guilt, thinking, “I have done nothing.” I felt an impulse to flee. It was then that proprietress of hotel told me, “We have to move forward, carrying with us the memories of the loved ones we lost. It is a great sorrow. Too great. But everyone is trying their hardest.” Listening to her, I could not bring myself to say, “Hang in there”. But I understood. We could not stop. “To take the next step, to move one step forward, we needed music instead of words,” she said. “Everyone can walk at their own pace. Everyone is different, but the important thing is that we are moving forward.” This made me feel a little better. 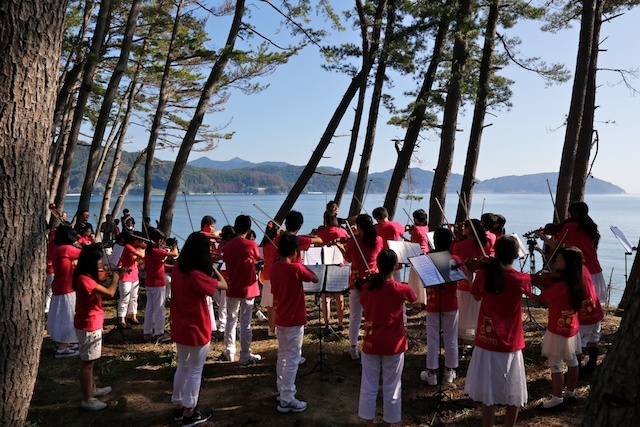 Music is gone in a moment. Nothing is left. We spend hours practicing the first note and every note that follows. There is no end, no completion, and no perfection in music. It doesn’t fill your stomach or protect you from the cold. But to my surprise and confusion, these people said they needed it. No matter what happened, the seasons come and go. The sun will set and rise again. Tomorrow will come. I never knew that music could help people face the future. And they taught me that music can reach deep into people’s hearts and stay with them.
We had the opportunity to play in a temple that was full of mortuary tablets. I heard weeping while I was playing. I was unable to put my heart into the music and could only play by rote. We then participated in several charity concerts. I was happy to hear that they were able to raise enough money to buy musical instruments for those who had lost their instruments in the tsunami.

I was able to visit the disaster area again this summer. I headed out assuming that the area would have been cleared. It had been a year and I was looking forward to visiting again. But the reality was different. Piles of rubbles remained with their color faded and the tops covered with weeds. It reminded me of the harshness of reality and I was ashamed of my ignorance. I keenly felt the struggle involved in the process of regeneration. I heard that the local people did not want us to use the word “rubble”. Although it looks like a pile of waste to me, for the survivors it is a part of their lives leading up to the moment that disaster struck, a pile of treasures full of memories. Upon hearing that, I realized I did not understand the depth of their sorrow.

The local children told us they had started to learn how to play the donated violins and played them for us. Developing a passion for something has helped them to move forward. They are making daily progress towards regeneration. It made me so happy that this interaction started through music.
The ocean was calm. It sparkled serenely, reflecting the morning sun as if nothing had happened. I found out that, strangely, nobody hates the ocean. We played music to the ocean, just as we did one year ago. This year we chose cheerful pieces and the audience was full of smiles instead of tears.

Many words such as rehabilitation, regeneration, and bonds, circulated throughout Japan after the disaster. Nature destroyed what people had carefully built. Towns were swept away. And the scars remain cruelly on display. As time passes in the midst of our hectic daily lives, we tend to forget. In my hometown, far from the disaster area, we hear much less news of the situation after the disaster. But sometimes it strikes me in quiet moments. The scenes I saw on television that day. And the shock I had when I saw it with my own eyes. People filled with sorrow and refusing to accept ‘nice’ words. I learned that there was a sorrow so deep that you cannot cry. At the same time, I learned how strong and how gentle people are.

Nature destroyed many things, robbed lives, and filled people with sorrow. However it could not steal their hearts. People surmounted their grief, offering support to those with weakness and pain, and looked to the future. Only objects were destroyed; people’s hearts are strong and beautiful. And their hearts are gradually becoming the driving force for regeneration.

I would like to give them music again next year. Even after the last piece of rubble is cleared, people’s memories of their lost ones will never die. Even after towns are rebuilt and everything is restored, I do not think that is enough for regeneration.

These days, scenes from the disaster area are always somewhere in my mind. I can picture people doing their best to move forward. I think of the disaster area. I keep thinking of it. By repeating this to myself, I think I have been able to sort out the feelings of anxiety I had before visiting the area last year. I was nervous at first, but now I can say that I think about the people there and that I care about them. This makes me feel as if I’m walking with them toward the future.

Myself and those playing musical instruments in Tohoku are facing the music for the sake of the notes that disappear. Music has amazing power. It is invisible and it will be gone, but it gently penetrates deep into our hearts, gives us strength and binds us. As with music, there is no finish or completion point for the disaster area. Regeneration. Just as we play the notes following the notes that have already gone, I hope that people in the disaster area will live on and continue moving forward.

1 Response to What is regeneration? —
What we learned from music