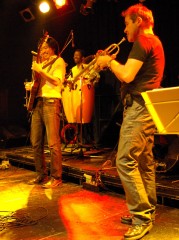 May 7th on Saturday, a charity concert of Tomohiro Maeda Paris Connexion was held in MJC Jean Vilar of Igny 15km away from Paris.
Before the curtain rised, the photograph which a member of Tomohiro Maeda Paris Connexion took at the time of tour of 2009 in Japan was projected by screen.
For daily sights and cherry blossoms, the image of mount Fuji, we also sent thought to Japan.
Since the performance began from a mellow number changed an atmosphere into a lively tune, the bodies and the hearts waved naturally in the rhythm and the music hall became one.
By the encore, the jazz version of the red dragonfly was shown while hearing a voice of much ‘Bravo’. For a sound came into a heart made people felt power of the music.
The photographs projected by screen was sold for consideration of MJC Jean Vilar at a music hall entrance and the proceeds of total amount was contributed for Japan.

We thank the musicians, the staff of MJC Jean Vilar for their big generosity and their efforts to bring the most possiblity to the victims and all spectators.
MJC Jean Vilar
http://www.ville-igny.fr/-Maison-pour-tous-MJC-Jean-Vilar-.html

A melody to echo warmly this evening in one of halls in Magnanville where is a peaceful town one hour drive from Paris. A seat and the closeness of the stage brought a sense of unity among people, the energy and the rhythm of the sounds colored the air of the room, the bodies waved naturally.

Not to mention a melody to attract a person, One of the charm of this group is their character whom three performers standing by different nationality and background. Love to sincere music reached the audience from the state where they played.
After 2 years from thier live-tour in Japan, they loved the japanese culture, the japanese way of life and people and in this concert, they send a yell to Japan with one song called ‘Il faut Pedaler’. It has a warm message to tell people to advance as to pedal bicycles.
Then the concert had enchanted the heart of people, ended the curtain with the encore « red dragonfly ».

The total amount of the donation achieved 425 euros.
We are anxious to thank for all the members of Tomohiro Maeda Paris Connexion, the spectators and the promoters of the event for their supports for Japan.

Charity concert Groove for Japan performed in Cafe de Paris on March 18 was prosperous very much.
there is 169 people arrived to 80 seats. It ended in a great success to exceed expectation.
The total amount is 1366,16euros will given to the Japanese Red Cross society through the Embassy of Japan in Paris.