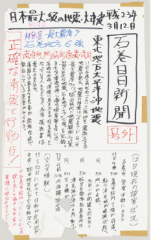 By March 2012, it will be a year from a disaster that stroked the northeast side of Japan. It will be a moment for all who are related to commemorating the event.
Guimet museum holds at this occasion an exhibition of wall newspapers which were prepared by the dairy Ishinomaki Hibi Shimbun, the principal paper at Ishinomaki which lost more than 3000 inhabitants by the tsunami.
There will be also documentary pictures taken by a French photographer in Japan to describe the circumstances where the reporters of this local paper accomplished their duties.

” The background of making the wall newspaper “

Immediately after the earthquake on March 11th, Ishinomaki Hibi Shimbun was also a victim of the tsunami. Having lost their rotary press, they did not resign themselves to undertake their roles to mediate the information. Every team gathered day after day and made the hand-made wall newspapers which were put up in the evacuation areas and areas which suffered only slightly to assure the access to the latest and trustful news.
The initiative of Ishinomaki Hibi Shimbun made itself widely known in Japan and aroused a great deal of controversy about the ideal method of the press in emergency.

” The wall newspaper and after… “

How to find ‘Ishinomaki Daily Children’s News’ in Paris