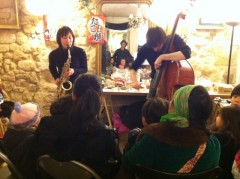 The fourth edition of the “Mini don, Grand don” event was held over three days from the 9th to the 11th of March at the Galerie Marais Ouest in the heart of Paris. The three organisers kindly allowed us to join the volunteer workers and give them a hand on one evening. Part of the collected funds were given to Japonaide, and directly sent to the NPO Kisyn no Kai to help with the completion of the “House for everyone” project in Rikuzentakata.

The idea behind “Mini don, Grand don” is to introduce people in Paris with Japanese culture, but it is also a great opportunity to discover the artists who volunteer for the occasion. For the fourth edition, the chosen theme for the event was the word “Party”. The three days were packed full with cultural animations : concerts, rakugo, kamishibai (picture theatre), a drawing exposition,…and passers-by were also able to enjoy some japanese food or take a look at the car boot sale.

The organisers had several goals in mind while preparing the festival : sending a message from Paris to the victims of the earthquake and tsunami in Japan, for whom the word “party” seemed to have lost its meaning, and also collecting the financial support needed for the reconstruction of the country. With over 400 people gathering around those ideals, and close to 70 volunteer workers, “Mini don, Grand don” managed to remain for its fourth edition a genuinely warm and welcoming event, and more than anything a beautiful demonstration of the friendship between France and Japan.

During the event 2825 euros were gathered for the “House for everyone” project, as well as 59 euros collected from the japonaide charity box. The total will be sent to Kisyn no Kai for the completion of the project in Rikuzentakata.We would like to thank the three organisers one more time : Minako, Elodie and Kumi, as well as all the volunteer workers and passers-by who joined in the festivities.

Home for All
This entry was posted in English. Bookmark the permalink.