The charity concert “Vexations” by E. Satie in piano solo 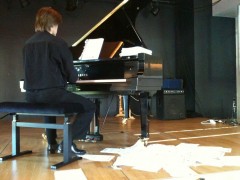 On June 26, The charity concert by Mr.Nikolaos Horvath was held in “Auditorium of the Pole Music” of small town, Lagny-sur-Marne, where 35 kilos away from Paris.

The program, “Vexations” is a noted musical work by Erik Satie.
This piano music repeats 840 times of 52 beats of melodies is constituted, and need approximately 10-24 time for a performance.
Mr.Nicolas Horvath continued playing this work alone without taking any rest which usually several pianists play by turns. He prepared 840 pieces of scores to count 840 times repetition precisely and dropped it one by one piece on the floor. With the progress of the time, a large quantity of scores lay on the floor. 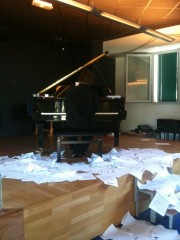 With the condition of the music hall, this piano solo was played by the tempo slightly faster than usual and finished in little less than ten hours before schedule.

After asked him the question, “Why do you do such a severe charity concert for Japan?” Since he has the companion of the Japanese woman, for the wound and the pain of the heart of the victims without disappearing, he observed this concert with strong feelings.

147euros, the total amount of the donation of this concert will be transferred to the Japanese Red Cross via the Embassy of Japan in Paris.
We thank to Mr.Nicolas Horvath and all spectators from the town, Lagny-sur-Marne, who joined us to dedicate our thoughts to the victims of Japan.