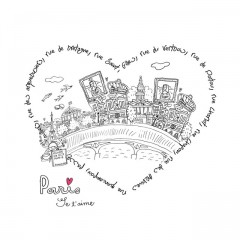 About the art series exhibition

Can we create the places of encounter get across to hearts in big cities? Is the art able not only to touch our heart but also to bring closer us? Are the artists factors of the urban life? Is Paris like a town of lovers drawn on a movie?

« PARIS JE T’AIME » is an artistic exposition in several stages that will be held in north marais from 14 February until 28 February. The exhibition is more than a limit of conventional galleries and familiar to the resident of Paris is performed.

Participating artists present the idea for love and it appeal to the heart of those who visited. The artists bring to share their vision of the love, a romantic place for lovers, an opportunity for meeting people. The love, the passion, the curiosity will be able to combine the wonderful meetings with the art.

A heart mark appears in the street of North Marais area to the exhibition hall at the time of an event holding start. Shops and galleries, the participation from the Paris community spaces during a holding period will be big welcome.

« Paris je t’aime » becomes as the 2nd year of holding gives a thought to the earthquake disaster on March 11, 2011. This theme of « Paris je t’aime 2 » executive committee which has introduced the various photographs, images, graphics and illustrations, is Japan. Three Japanese artists open a Parisian’s hearts.

One year after the great Earthquake, Memorial Gathering in Paris

Japan Expo 2011
This entry was posted in English. Bookmark the permalink.