The second evening of the « Solidarity with Japan » concerts – a symphonic concert at the Home of Japanese Culture in Paris.

The JAPONAIDE chamber music formation, composed of the same members as the JAPONAIDE orchestra, was as we know lengthily acclaimed by the audience at the end of the UNESCO concert the other day. It came back yesterday for a « concerto evening », under the conduction of Mrs Kanako Abe, and filled the hall of the HJCP with elegant harmonies of flute, violin and piano.

The evening started with Eiichi Chijiiwa playing Vivaldi’s « spring » on the violin. Seiya Ueno interpreted Mozart’s Concerto and Bach’s « badinerie » for flute at the end of the first part of the concert. Then came Etsuko Hirose on the piano, playing another Mozart concerto. These masterpieces, though they were played by a rather small formation of musicians, brought a soft and enchanting atmosphere of spring to the concert hall.
The spring of 2011 was marked with sadness and catastrophes, and we could not help but shed some tears as we passed through it. Yet, such appeasing concerts can bring us both solace and peace of mind.

The money collected during this evening amounted to a total of 2889.60 euros ( 2490 euros from ticket fees and 399.60 euros from direct donations ).
This sum will be transferred to the Japanese Red Cross via the Home of Japanese Culture in Paris. 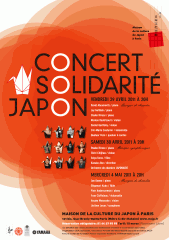 END_OF_DOCUMENT_TOKEN_TO_BE_REPLACED

The chamber music that brought spring adjusted the heart of all one.
The first step of the « MARATHON » concerts of the chamber music by the Paris Conservatoire was held on 24th March in the Orgue hall of CNSMDP.
The hall was crammed with people and the total amount of the donation achieved 1219,05euros. We will surely send them to the embassy of Japan in France.
We thank you for your presence and your support.
We thank the musicians for the marvelous moment that they allowed us to share.